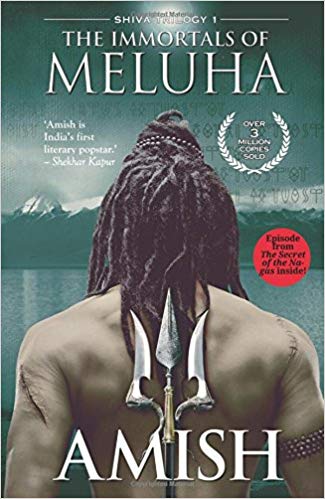 The Immortals Of Meluha (shiva Trilogy)

An intense story 'The Immortals of Meluha' draws heavily from stories and legends of Hindu mythology that have been passed on from generation to generation.

First book of the trilogy, the Immortals tale unfolds in Meluha, a land that is ruled by the Suryavanshi tribe that firmly believes in the prophecy of 'Neelkanth' Shiva being their saviour. The Suryavanshi’s (Sun worshipers) are of the firm belief that it would be Shiva who would save them from the wrath of Chandravanshi’s (Moon worshipers).

Blending mythology and philosophy drawn from Hindu traditions, the gripping narrative moves with speed to have Shiva step up to take it upon himself about banishing evil from society.

As the tribal leader of Meluha, somewhere in Tibet, Shiva decides to help the Suryavanshi's in their fight against the Chandravanshi, who have allied with the Nagas, a cursed tribe.

As the drama unfolds, Shiva, the tribal leader from Tibet, gets caught up between the two warring groups, where a realization dawns upon him of how his choice was affecting the war outcome as well as of aspirations of rising above the conflict and its actors begins to dominate the narrative.

The author has creatively woven the legend of Lord Shiva; His marriage to King Daksha's daughter Sati is this first part of the trilogy.

We put you first! That is why every book comes with an easy experience, completely designed to save you time and money.

Shipping
Delivery charges apply but returns are free. Most of the times we will deliver your books within two working days of your order confirmation.

Book Quality
If for any reason, your book's condition is not acceptable, we will immediately ship you another copy as soon as possible.

Highlighting
The book you borrow will be used by someone else after you return it. Please refrain from highlighting or writing on your borrowed copy. No writing or permanent damage is allowed.